This blog is designed to explore the new Fairy Tale Tarot by Lisa Hunt. But since I LOVE to blog....I am sure I'll wander off into some other musings about fairytales!!

"The Fairy Tale Tarot cards are like gazing into that pool. They reflect different aspects of each of us. They illuminate or accentuate those parts of us that we seek, or deny, or just long to understand. The cards and the fairy tales they are based on, provide a framework for understanding self and the human aspects of life. And maybe the "not so human" aspects too....the spiritual. They are the water in the pool. Clear and shimmering, reflecting clearly and yet also bringing forth tiny glimpses of those wings. It is this aspect of the cards that called to me. I feel they have things to reveal to me and I am anxious to hear them "speak." 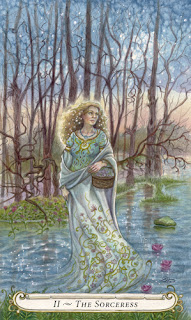 The beautiful Lake Maiden is lured from the lake by the Shepderd who adores her and marries her. She warns him that he must not strike her because if he does so three times she must return to the lake. He taps her on the shoulder absent mindedly one day and she tells him that he only has two times left. At a wedding she cries tears of great joy and love and when he pats her shoulder she reminds him that he must be very careful because only one time remains. At a funeral she laughs and he grabs her. So the thrid time is here and she returns to the lake never to be seen by her husband again.
The Fox Maiden ( Japanese FolkTale) 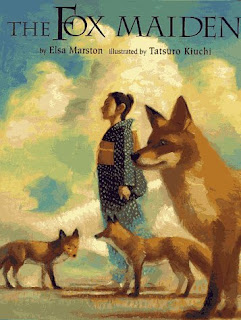 "I've been waiting for you for over a hundred years." says the little girl beside the road...and thus the man takes her to Kyoto with him and there she dances so beautifully that the Emperor calls for her to dance for him. Eventually she ends up living in the palace and is the most favored by the Emperor. Many years pass and he decides to hold a grand ball for her on her birthday, to which his advisors are opposed.
During the ball a great darkness descends and the Emperor is in a trance. Many of his advisors search for answers and finally a great wise Diviner provides them with a poem and using a ﻿Sacred Gohei they recite it to the girl, called Tamamo, Jewel without Flaw. In doing so a great Fox with nine tails appears in her place and rushes off. Off to far far away where it hid itself beneath a great black stone. The river and the stone were deadly and avoided by all that knew of them. So the years passed until a High Priest was passing through and hearing of the stone he did not avoid it but went seeking it because all deserve Nirvana.  He discovers the fox spirit and she asks to be struck down because she has discovered love and she weeps bitterly and can stand the grief no more. But instead he gives her a beggar bowl and prayer beads and tells her to go in search  of enlightment.
The Moon Maiden (A Japanese Fairy Tale) 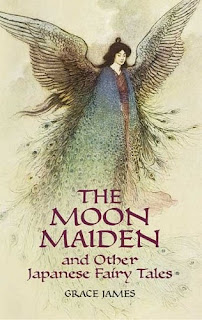 In the tale of the Moon Maiden, a poor, childless bamboo cutter finds a glowing jewel buried beneath a bamboo plant. When he picks it up, it opens to reveal a lovely fairy dressed in green who wishes to live with the man and his wife. To help the poor couple out, there are golden coins spilling out of the broken jewel. So together they return to the humble cottage and meet the wife. All is well, and the man builds a grand home and has plenty of money. The fairy grows to be a lovely young maiden and everyone wishes her hand in marriage. Finally the King, himself visits and loves her dearly. She declines his proposal and grows sadder everyday. Finally on a lovely night the moon is shining brightly and the air is filled with mist when she confesses to the humble bamboo cutter, his wife, and the King, that her father is the King of the Moon and he had exiled her to earth for three years. Now the mist is not mist but the kings messagers coming to bring her home. She can not stay and the King is broken hearted. She leaves him a bottle of elixir so that he may live forever but he burns it on a mountain top because "what good is living forever being parted from the Lady Beaming Bright." The vapors send his message to the moon.
All three of the maiden stories highlighted here are about love and lost love. The Lake Maiden actually comes across as the coldest because she leaves and it does not indicate that she regrets it. However in the Moon Maiden she despairs because she must leave but she cannot take the King with her. Lastly the Fox Maiden loves and because of it is able to feel great grief, making her realize that she does not want to live forever, for in doing so she will feel the pain always.
Posted by Ginger at 1:04 PM

Email ThisBlogThis!Share to TwitterShare to FacebookShare to Pinterest
Labels: II The Sorceress, The Lake Maiden

My Other Blogs about Tarot/Oracles

"Obsessed by a fairy tale, we spend our lives searching for a magic door and a lost kingdom of peace." Eugene O'Neil

"Deeper meaning resides in the fairy tales told me in my childhood than in any truth that is taught in life." Johann Christoph Friederich v. Schiller~

"In a utilitarian age, of all other times, it is a matter of grave importance that fairy tales should be respected." Charles Dickens~

~C.S. Lewis~"Sometimes Fairy Stories May Say Best What's to Be Said" Of Other Worlds 1966